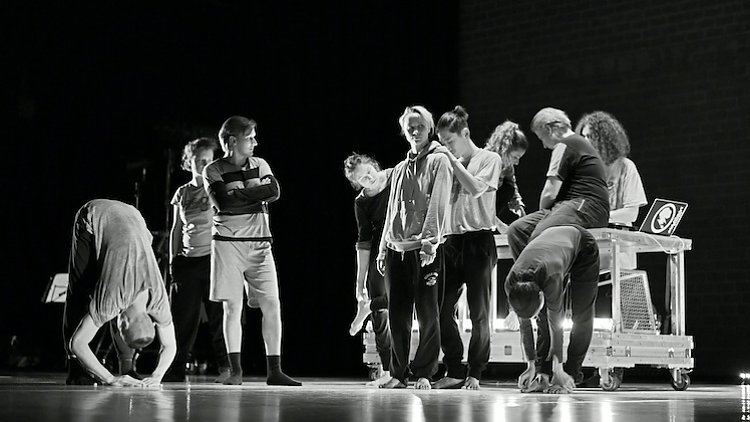 In many-layered stagings, MOUVOIR deals with the central areas of our modern lives, in a manner both authentic and experimental. An uncompromising observer, Stephanie Thiersch dissects her environs: Popular culture, philosophy and fine arts become her tools. Thiersch’s interest in physical and emotional conditions that defy a clear definition, the human tilt, informs her style.

“Stephanie Thiersch’s works seek a confrontation with other media but still remain dance pieces at their core. The choreographer’s interest is always directed at the body in the process of transformation and transition. Thiersch’s bodies not only oscillate between their own various media representations, but also embody heterogeneous emotional states. The confrontation between contexts is not just one between different art forms and media. As in the approach to Africa in As/If (We Would Be), it is also a confrontation of cultures whose foreign gestures place an external gaze on what one considers one’s own. In Bronze by Gold, the musicians of the Asasello string quartet move together with the seven dancers in the space, whereby the intense movements of the music enter into their bodies so profoundly that it drives them to physical exhaustion. The piece confronts our western party culture with horrors of terror and death that we have yet to even fathom. Without having noticed it at the outset, the Belgian DJ’s scratched sounds suddenly sound like gunshots; the dancers’ ecstatic poses transform under our eyes into cries for help. They are neither one nor the other; Stephanie Thiersch suspends us between extreme states, attempts a balancing act between contexts and challenges us to take a stance in the spaces in between.”